You have just landed on the brand new website of Tampere Hall – welcome! We apologize for any inaccuracies or omissions.

A visually impressive combination of theater, dance and circus.

The international gala evening of In the Light Mikki Kunttu festival will feature performers and artists from Kunttu’s career. The lighting for the evening is designed in collaboration with a talented young designer Alex Hautamäki.

The performers as introduced by Mikki Kunttu:

Westward Ho! for me marks the beginning of our collaboration with Tero Saarinen. I also consider this piece to be the beginning of my professional career as a lighting and stage designer. Meeting Tero was a wonderful stroke of luck as I got introduced to the magical world of dance. Dance in many of it’s forms has always been very central to my work and it has largely shaped the way I see and experience the stage and space. This special evening Westward HO! will be danced by it’s original cast Tero Saarinen, Yuval Pick and Henrikki Heikkilä.

Chisu is a front row singer-songwriter-producer from Finland. She is a magical live performer and it’s very special to have her perform in A Night of Light.

Martti Suosalo is one of our front row actors for both the stage and the big screen. He will perform an excerpt from his legendary performance of “Madman’s Diary”.

Michael Monroe is a living legend of rock’n ‘roll. I have had the pleasure of working with him a number of times and it’s an honour to call him a friend as well. The man is a wired detonation of pure energy on stage and I’m very excited to have him perform in A Night of Light.

Back in 2017 Alexis performed his fierce aerial lamp in a Cirque du Soleil production “Stelar” in Andorra. Aerial lamp is a true signature piece and truly unforgettable. I loved the way we were able to collaborate with Alexis and I believe his performance and lighting together created a very special moment in time and space. I’m very honoured to have Alexis perform in the gala evening.

Spring 2020 we were working on Jorma Elo’s “Carmen” for Boston Ballet as the pandemic hit and the opening night was cancelled. I have had the pleasure of working with Mikko Nissinen’s Boston Ballet a number of times and it’s a great honour to be able to have them take the stage at A Night of Light.

Kimmo’s artistry has been described as the re-inventor of accordion, which is very much to the point. I have always admired his fearless drive for creation and the artistic freedom that Kimmo represents. Kimmo’s live shows are always on the edge of the unexpected and he is one of the artists I admire the most. It is a great honour to have him perform at the Gala Evening.

Sometimes you see an artist on stage and the energy, the spirit and the skill are just unbelieveable, out of this world. Mizuki performed her mind blowing aerial silk number in a Cirque du Soleil production “Vitori” in Malta that we were both involved in. There is this cool elegance to her, her stage presence is poetic in an almost violent way, absolute beauty contrasted with fearless sharpness. One of the best circus acts I have ever seen.

I met Adam back in 2017 as we were creating a Cirque du Soleil production “Stelar” in Andorra. Adam is an amazing performer and I think of his character as “The Protagonist” of the gala evening who will guide us through the night.

The show has one intermission.

Read more about the festival

We reserve the right to changes. 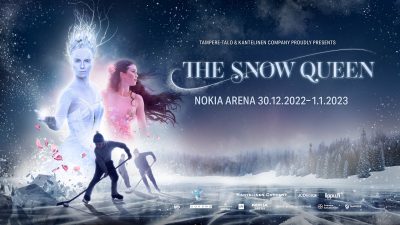 Now for the first time on ice with top national and international stars performing H.C. Andersen’s story The Snow Queen!