Environmental responsibility is built out of individual actions – both large and small. Tampere Hall has a long history of environmental action, one example of which buzzes busily from flower to flower.

Bees and other pollinators are vital to both biodiversity and global food security. Approximately 75% of the world’s agricultural plants rely on pollination by insects to ensure successful crops.

In 2018, Tampere Hall established an apiary next to its roof garden, and the first summer saw roughly 100,000 bees produce a stunning 104.7 kilograms of honey.

Since then, the number of hives has been increased, and last year the roof garden was already home to 200,000 bees, producing 130 kilograms of honey. Tampere Hall’s Executive Chef Juhana Paturi says that, over the years, he has positively fallen in love with bees and all things honey.

“Bees and their precisely organised colonies are fascinating. And honey is a wonderful ingredient that inspires you to keep finding new ways to utilise its flavour in different dishes and products.”

Inventing new ways to use honey

Over the last five years, Tampere Hall has found a number of ways to use the honey it produces. Soon after the bees arrived in 2018, Paturi developed his own beer using their honey, and soon after that, Tampere Hall’s signature cranberry tart made with honey from the roof apiary landed on customers’ plates for the first time. Honey lip balm also appeared next to the jars of honey on Tampere-Talo Shop’s shelves.

“During intermissions, theatre goers can choose to enjoy a piece of honeycomb with their tea, and we are now also bringing out beeswax candles. In addition, we have developed a honey muesli bar that is produced for us by Linkosuo,” Paturi details.

Tampere Hall’s restaurants use the apiary’s honey to complement and replace sugar in many recipes, such as root vegetable roasts, to which it lends a perfect finishing touch. Paturi says customers are always surprised and delighted to hear where the honey comes from. Tampere Hall’s honey belongs to one of the most prized honey varieties – lime honey – and it has received no shortage of praise for its enticing taste.

The roof offers an excellent environment for bees

“The taste of honey is the result of all the different nectars the bees gather, and Tampere Hall’s bees gather nectar from a wide variety of plants from the nearby Sorsapuisto park and Kalevankangas heath. But it’s true that the hint of mint that characterises Tampere Hall’s honey comes from lime tree flowers,” beekeeper Teemu Aittamaa confirms. Aittamaa’s company, Korpikuusikon Hunaja, is responsible for Tampere Hall’s beehives, as well as jarring the honey they produce.

Tampere Hall’s beehives are particularly close to Aittamaa’s heart because they were the company’s first real attempt at an urban apiary.

“Many people had doubts about how the bees would fare in the city, but I’ve seen it with my own eyes – they’re thriving. A clear sign of how well they’re doing is the amount of honey they’re producing. Tampere Hall’s hives produce an above-average amount of honey every year,” Aittamaa says.

“The roof offers a good amount of shelter, and the black bitumen keeps the hives warm. It’s an excellent environment for them.”

Bees only focus on their hives

When the apiary was first established, some people may have been worried about stinging insects terrorising people in Sorsapuisto park. Aittamaa knows that many people confuse bees with their high-strung cousins, wasps, and is well-practiced in explaining the difference between the two.

Luckily for the reputation of bees, declining pollinator numbers has been a common subject in the news over the last few years, and many people are now ready to welcome beehives in the city centre. 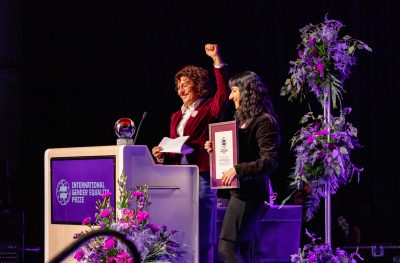